So, we had a bamboo fly rod making class end Sunday night and one start this past Sunday morning.

As usual, we have students in from all over the country and it’s a diverse group wading through their first bamboo rod making experience.

Life has been hectic, as usual since Bill returned from Colorado. At the beginning of the month, Bill rode his motorcycle out to Colorado. Read that again…Bill rode his motorcycle from Mineral Bluff, Georgia to the Rocky mountains. This adventure started innocently enough. I signed him up to go out to the Colorado bamboo rod making conclave along with a plane ticket and rent-a-car. A few days before the trip, I was giving Bill his itinerary and he said, “I am riding my motorcycle out there. It’s easier.” I said, “Ooooookaaaay, babe, whatever you say.” Truth be told…I was not the least bit surprised. So, he loaded up his bike and left for the West. Bill went to the gathering in Lyons, CO and then met his good friend Bernard in Montrose, CO to fish his brains out before making the long trek home back to Georgia.

We missed him. We are a family of co-dependents…even the dog.

Riley (our apprentice and dear friend) and I felt totally abandoned for the first few days. We threatened to revolt and spend our days with the shop door locked turning pots and silk screening objects opposed to selling bamboo fly rods. Instead, we held down the fort, worked on bamboo fly rods and organized the shed. However, we did manage to turn a few sideways pots. Here are a few shots of the family without a paternal figure…

Things returned to normal as soon as Bill turned into the drive.
Chaos restored.
Life is good.

Here is Bill upon his safe arrival home: 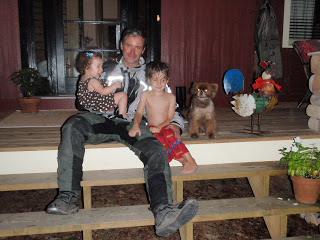