Here is one woman’s interpretation of a 20-year bamboo fly rod making abyss. 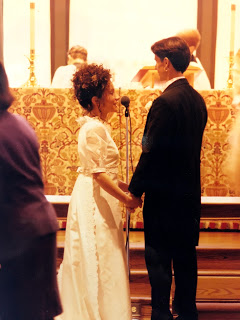 Boy and girl experiment with adulthood

Young, broke and escapists at heart…they knew the best was yet to come…

Said experimentation included Bill’s professional competitive road racing career (we fondly refer to this as his “mainstream job”…it was during this time that Bill sought respite in the sport of fly fishing.

(FUN FACT) It was while racing in Seattle, Washington in 1994 that Bill made his first bamboo fly rod related purchase beyond the $7 used paperback book.  He found a set of VHS instructional videos on “how to make a bamboo fly rod” that became the excruciating soundtrack to our lives for the next 3 years.

Bill’s obsession with fly fishing grew at an impressive velocity.  We spent these years gathering nearly a lifetime of experiences on the water and in the woods.
My incessant whining about the excruciating travel and training schedule  A succession of natural occurring events and a nasty training accident ended Bill’s cycling days but fortunately freed up plenty of time for an equally bizarre avocation. 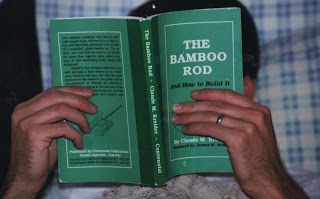 As our peers peeled off into the real world corporate world, we deliberately set out to make bamboo fly rods for a living and avoid reality altogether.  Bill had completed his first rod after years of  research…(remember that the internet was NOT a resource at that time).  That first struggle rod will forever be Bill’s favorite rod.
Oyster’s wait list ensued shortly thereafter.

By 1998, we had a fully functioning 200 square foot, one man bamboo fly rod making shop in the basement of our home complete with sheet metal walls and a homemade hinky bench.  It was step up from the “prequel” version of a shop which involved our sweltering hot loft, old coffee table workbench and staircase with holes in it to accommodate the varnishing room.
(FUN FACT) Bill’s stripped the wheels from his racing bike to build out his varnish room.  I think that is what is referred to as a “full circle” moment.  Sorry… 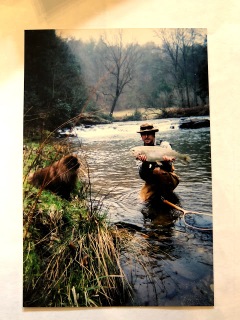 Internet dial-up access and more resources for learning the art of bamboo fly rod making were on the horizon…but not really.  Most makers feverishly guarded their art and were not sharing information with us anyone.
Bill would wake up each morning and say that bamboo fly rod making was a series of relentless failures an endless cycle of…”trail and error”.
Little did we know…
Our little one man shop had plans for us…

After receiving a call from a bamboo fly rod maker telling Bill he “better not start building bamboo fly rods”…(yes…this happened), I distinctly remember Bill hanging up the phone and saying:

“If I ever get truly adept at this…I am going to teach others.”

He was lovingly named after our Cape Dory sailboat…that of course we had to sell because we had a baby.  In addition to bamboo fly rods, sailing was at the center of our lives and we could not imagine a more fitting was to say goodbye  pay our respects to our love for the sport.

Less than 3 weeks after Cutter was born, we traveled all over the country for another trade show season.
Now,  pay close attention and try to keep up…things get a  frantic from here.

It’s no longer about us.

Legacy takes on an entirely new meaning in our lives.

Fish or cut bait, right?!  Sorry not sorry.
It was time to intensify the business feature of our story.  It was time to take unimaginable risks or go work for UPS to secure the future of Oyster. 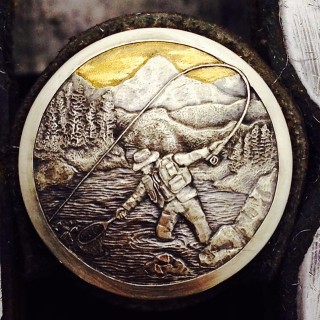 size of a nickel 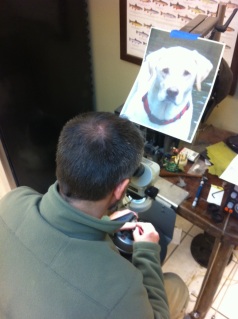 After a few years of outsourcing our rod engraving with less than desirable results, Bill considered learning to engrave himself.  He started with a week long intro class at a school in Kansas.
It was an enormous investment and once again,
we bet on ourselves.
Honestly, even I thought Bill was being a lunatic tad optimistic thinking he could just go “learn to engrave”.
I have never seriously doubted him since.
There is no glass ceiling on Bill’s hand engraving.

Me: (breathing heavily):  “Ummm…babe…President Carter’s people just called and commissioned a bamboo fly rod for him and asked if we can have the Presidential Seal hand engraved on the reel seat.”
Bill:  “I am going to hand engrave it.”
Me:  “No doubt.”

We have made bamboo fly rods for myriads of people…from bricklayers to heads of state.

The common thread amongst our clientele is not only their obvious reverence for fly fishing but a commitment to fine handcrafted pieces.

So, the misconception that these soul poles are a vanity purchase is simply untrue.  They represent an extension to one’s self in an inexplicable manner.

So, when I receive an order for our rod, my respect for the individual is defined by a connection that is once again…inexplicable.

…predominantly, to emphasize that our rods commissioned for President Carter rod are special beyond the fact that he is unarguably one of the most worthwhile humans to ever walk this earth.

We practice a discreet standard yet President Carter was so publicly generous with his praise for our craft and fly fishing that this sent us unwittingly on a trajectory that proved to be a pivotal point for Oyster.

Bill and Carter’s paths continue to cross and they both get better with age. 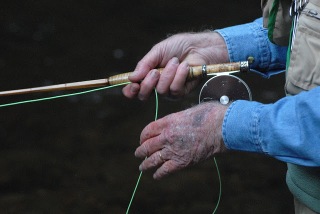 ﻿﻿﻿
It was then Bill said, “shut off the radio and television, stop all of your newspaper subscriptions (note that I was a journalism major and a print media junkie)… I have a family to support and I have to work and do not want to be distracted.”

We will never know if “shutting out” current events (understatement) helped our business or not…but it did keep morale up and Oyster grew on every level in 2008.

Our classes were FULL, our bamboo fly rods were backlogged, Bill’s hand engraving exceeded all of our expectations and more importantly gave Bill the necessary creative outlet an artist needs…

We grew faster than ever expected…

With a brand new baby (8 days old), the recession in full swing, 3 mortgages and a bamboo fly rod class starting the following week…it seemed like the perfect time (yes, that is sarcasm) to make a move. 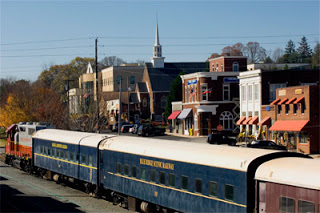 However, we had outgrown our “little red” shop in the woods and knew the next natural transition was a store front.

And while we moved to Main Street for professional reasons and more exposure for Oyster, we ended up with a community.

A community of friends, fly fishermen, fellow entrepreneurs and like minded escapists (a reoccurring theme in our lives).
We found home. 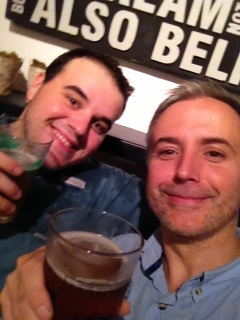 Riley swiftly transitioned from employee to friend to best friend to family.
And he came with a package deal…his childhood sweetheart, now wife…Quinn.
Quinn fit in disturbingly well…so, these years brought growth on a deeper level.
Our band grew. 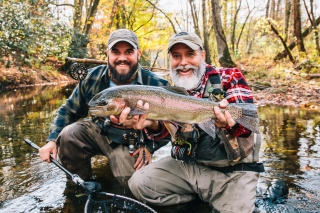 After discovering how much time we were spending fly fishing on saltwater, 2009 was also the year we started our “Salt Series” line of bamboo fly rods.

To-date, our 9 wt. Salt Series bamboo rod is one of Oyster’s “greatest hits”. 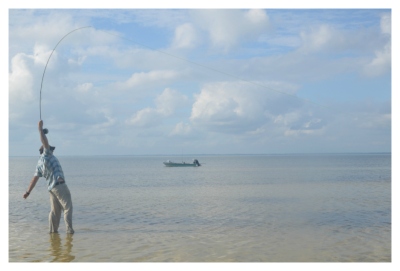 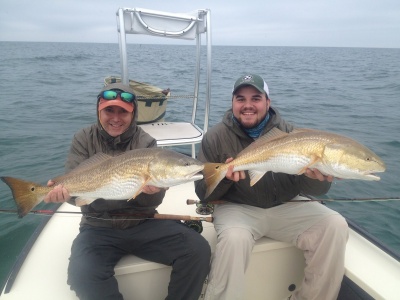 Equally as important, 2011 was the year we bought land on  Main Street in Blue Ridge, Georgia.

The land was one of the last available sites in a historic district only a few doors down from our renovated former ice cream shop.  This freaked me out seemed necessary.

Renting was a drag and designing our own space was daunting intriguing.

And this move made it all feel like a rite of passage for our own
AMERICAN DREAM.

While building new digs may not be a big deal to most…
it was a behemoth move for Oyster.
2012 was a rousing year of fear growth and change. 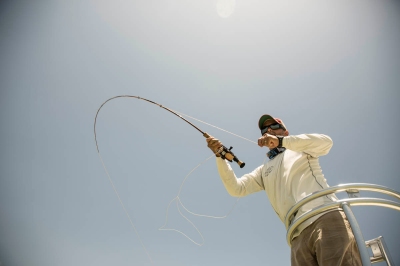 Since 2010,  Bill has traveled with Oyster clients on fly fishing trips centered upon our bamboo fly rods.  After several years of Patagonia jaunts, we expanded the bamboo fly rod tour.
In 2014, the Oyster Travel Club was formed as we actively assembled trips for
“those with a common bond for an uncommon passion.”
The Oyster Travel Club is yet another layer of our lives business created organically from a need that arouse over the years. 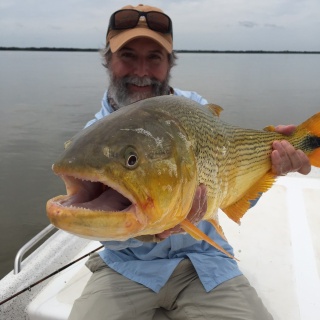 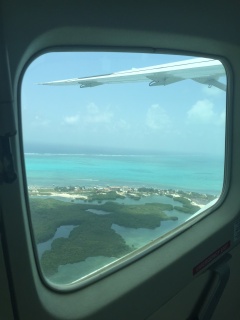 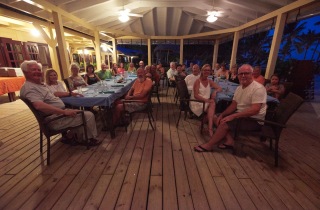 Oyster travels near and far and we have a hell of a time.

In 2015,  our bamboo fly rod sales and bamboo fly rod making classes were at full tilt.
Meanwhile, Bill’s hand engraving had taken on a life of its own.
Bill was granted an opportunity that we seized as soon as we were able to carve three months out of Bill’s schedule immediately to completely hand engrave an entire shotgun sent to us in the “white”.
Click here for photos of the gun
In 2015, Bill earned the distinction of being asked to become an instructor at the GRS engraving institute.  GRS is the cornerstone of hand engraving in the U.S. as well as renown worldwide. 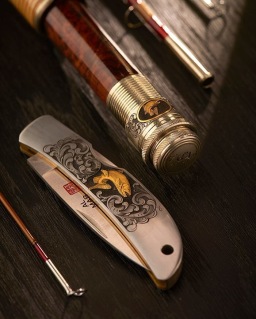 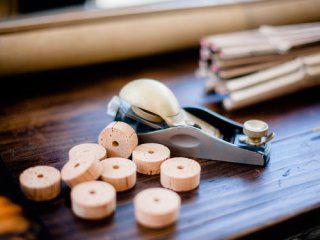 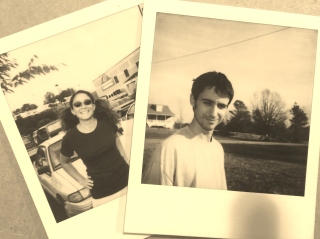 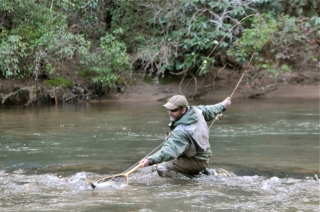 “For the American
Fly Fisher,
the Bamboo Fly Rod
is our
Samurai Sword.”
-Bill Oyster